‘We Own This City’ Finale Recap: Wayne and Sean’s Fates Revealed

Even if you read Justin Fenton’s We Own This City: A True Story of Crime, Cops, and Corruption and know how everything ended in real life, chances are you watched the HBO adaptation for the performances and to see how the limited series’ creators David Simon and George Pelecanos interpreted everything.

Ultimately, Simon and Pelecanos created a fair and fascinating examination of modern-day policing. They also showed how the Baltimore police department’s in-house corruption destroyed lives and left an already beleaguered city in worse shape, following Freddie Gray’s death at the hands of officers.

Never was this message more clear than in Monday’s heartbreaking series finale, in which homicide Det. Sean Suiter possibly took his own life. Although the coroner’s office ruled it a homicide, an independent review decided the investigator staged his self-inflicted death to protect his legacy and ensure that his family would be cared for financially.

Without saying whether or not Suiter fell prey to Sgt. Wayne Jenkins’ sticky fingers and grimy ways, the series finale painted an ambiguous scenario where Jenkins’ former partner felt like he was guilty by association and didn’t want to snitch or lose his job in order to bring Jenkins to justice. If Suiter did steal or take stolen money, we will never know. But Jamie Hector did a thoughtful and compelling job of bringing Suiter’s very nuanced and tragic story to life. 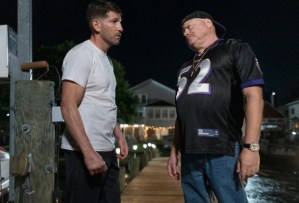 In a cruel twist of irony that played out in the final 10 minutes of the finale, Jenkins was able to use Suiter’s death as a way to blame the deceased husband and father for planting drugs on a suspect.

Like Hector, Jon Bernthal never disappointed as Wayne. With a exaggerated cockiness that barely hid a mountain of insecurity and self-deception, Bernthal presented a top cop who sold drugs, stole money and cheated on his wife but never thought he was in the wrong.

Wayne drank his own tainted Kool-Aid for so long, he was actually and noticeably shocked when he got arrested, tried and sentenced. His fellow officers and subordinates were punished as well, but Wayne’s sentence was the harshest because he cooperated the least. Knowing all of this, Bernthal still managed to make his character sympathetic, and that is no small feat in a story full of compromised politicians and police officials alike.

Last but not least, Wunmi Mosaku’s DOJ attorney Nicole Steele punctuated how broken the justice system is when she attempted to create a consent decree for the Baltimore Police Department and realized body cameras — if the city even bothered to pay for them — would do little to nothing to stop the baked-in brutality and corruption. Steele resigned as a result, and even though the character was a composite, it would’ve been nice to learn what became of the well-intentioned attorneys who inspired the role.

What did you think of the We Own This City finale? Grade the limited series in our poll, and share your thoughts on the drama and its closer in the comments.

Nick Cave Says He Wants to Make a New Bad Seeds Album in 2023, But Has “Got to Write the Bloody Thing”