Warning: The following contains spoilers for The Summer I Turned Pretty Season 1. Proceed at your own risk!

One of the bigger changes in The Summer I Turned Pretty‘s transition from novel to TV series involves the character of Jeremiah Fisher (played by Gavin Casalegno), one of two brothers vying for the heart of 16-year-old Isabel “Belly” Conklin (Lola Tung). 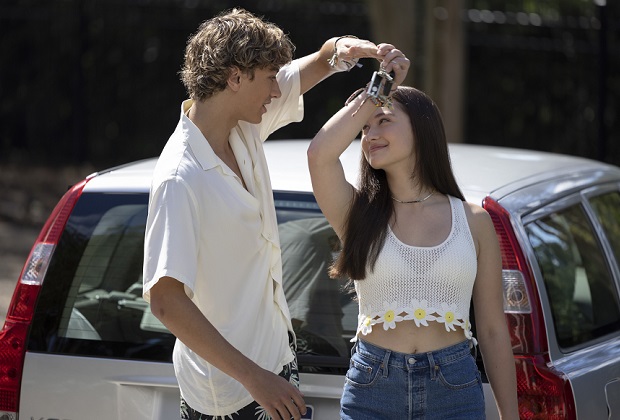 In Prime Video’s YA drama (which premiered Friday with all seven episodes), Jeremiah is sexually fluid compared to his book counterpart. In Episode 2, he points out all the girls and boys at the country club that he’s kissed, then later describes himself as an equal opportunity flirt.

“My approach to this adaptation was: How would I tell the story in 2022? What would that look like? And how would that change things?” co-showrunner Jenny Han, who wrote the novels, tells TVLine. “I think perhaps if I was writing the novel today, I may have made that choice because I think that he’s always been a character, to me, that is really at ease with himself, really comfortable in his own skin, and openminded and open to exploration. I do think that’s more reflective of today and young people today and the way they view sexuality being much more of a spectrum.”

Given that he’s just a high schooler, Jeremiah is still exploring his sexuality and isn’t ready to identify as bisexual, Han adds. “I would say [he’s] sexually fluid. He is a young person who’s figuring out where he falls in all that and hasn’t experienced a lot of of love yet. It’s still kind of early on in that journey,” Han explains.

And although Jeremiah is sexually fluid in this version of the story, the books’ central love triangle of Belly, Jeremiah and the other Fisher brother, Conrad (Christopher Briney), remains “intact” in the show, Han says. “I still feel that all the characters are the same,” she notes.

The Summer I Turned Pretty fans, what did you think of the premiere? Grade it below, then hit the comments!

4 Key Moments From ‘It’s All About The Journey’ (RECAP)