Jeff Bridges plays an aging ex-CIA asset in the new FX thriller The Old Man… but Thursday’s premiere proved we shouldn’t count the old guy out just yet.

When we meet Bridges’ character Dan Chase, he’s living a quiet, idyllic life with his two dogs — though he does have to get up in the night to pee several times. (Plus, he’s having unsettling dreams about a woman crouched in his bathroom.) In a phone call, his daughter Emily remembers how “indestructible” she once thought he was, but now she’s worried about him. He’s a little worried, too, asking a doctor to run cognitive tests on him since his late wife Abby had problems in that area. 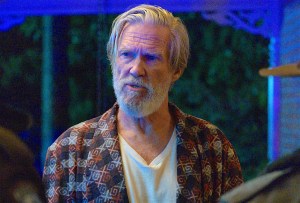 Dan also notices someone watching him in a local shop, so he sets up a rudimentary alarm system in his home with a string of old tomato cans. That night — after a dream where we learn the woman in the bathroom is Abby, agitated and confused — he wakes up to the sound of cans rattling, and he snaps out of bed, gun drawn. Downstairs, one of his dogs pounces on an intruder, holding the guy by the throat until Dan calls him off. He asks the intruder for his name, and when the guy doesn’t respond, he puts two bullets in him, searching his pockets as he bleeds out. He also carefully gets the guy’s fingerprints on his gun and fires a couple of harmless shots into the wall before dialing 9-1-1.

He tells the cops the intruder shot at him first, and he shot back in self-defense. (He also tells them he’s retired and used to work in “real estate.”) After they leave, he quickly hits the road, calling his daughter to tell her: “They found me.” He’s going off the grid and laying low for a while, he adds. Meanwhile, we meet Harold Harper (John Lithgow), an assistant director for the FBI who’s building LEGOs with his grandson — and cries privately when the boy mentions his dead mother and father — as he gets a call from the bureau. They need his help with Dan Chase, who they were ordered to locate and retrieve. Harper doesn’t understand why this case is being reopened after 30 years, but he says he’s on his way. 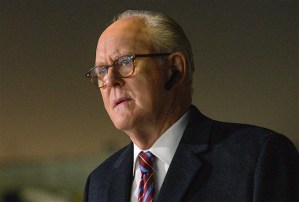 While Dan eats in a diner — and flashes back to him and Abby as young lovers, deciding to quit running and build a life together under new names — he gets a call from Harper, informing him they put a tracker on his car. “You have no idea how different the game is from the last time you played it,” Harper warns him, telling him he’s being tailed by specialists who might want to take him back to Afghanistan. Why would Harper tip him off? He admits he doesn’t want to have to answer questions about how he handled things 30 years ago. If Dan tries to fight back, “I’ll have to put you down,” Harper says, adding that he knows Dan has a daughter they can exploit. He advises him to “disappear”… which means he can never talk to Emily again. (Harper’s secret phone call draws the attention of an FBI underling, but Harper coldly asserts his authority, telling him that he is not someone who’s “safe to f–k with.”)

Dan calls Emily to tell her he has to say goodbye for good, but she fires back: “F–k that.” She presses him to fight back, so he takes a quick detour, leading the two men tracking him down a dark and dusty side road. They get out and realize he ditched his tracker… and then Dan drives his car smack into theirs, pulverizing one of the two pursuers. He gets out and shoots the badly wounded guy dead before getting into a fierce hand-to-hand fight with the other guy, lit only by the cars’ brake lights. Dan gets the guy in a chokehold, but the guy fights him off and eventually gets the best of Dan, typing him up with zip ties and stuffing him in the back seat of his car. Dan whistles for his dogs, but they arrive just as the car is driving away.

Dan’s not done yet, though: He uses a hidden pocketknife to cut through the zip ties and kicks the driver in the head, sending the car crashing into a gate and flipping over several times down a hill. When Dan comes to, he and the guy struggle for the knife, and Dan manages to slash the guy in the wrist — and then he calls his dogs, who rush in to tear into the guy. A bruised but not defeated Dan calls Harper to give him a stern warning: “Any more you send to me, I’m sending back in bags. Any one you send to my kid, I’m sending back in pieces.”

Alright, now it’s your turn: Give The Old Man‘s premiere a grade in our poll, and then hit the comments to share your thoughts.

SLMN Releases “Where Did You Go” with Kvn Rose ft. anders | ThisisRnB.com

Kevin Costner Leaving Yellowstone in Season 5? May Not Be a Bad Thing

SLMN Releases "Where Did You Go" with Kvn Rose ft. anders | ThisisRnB.com

Fallen Remains One of Denzel Washington’s Most Underrated Movies