Sad news for Shaun and Lea.

During Monday’s episode of The Good Doctor, the marrieds decided that enough time had passed since Lea’s Season 4 miscarriage to try and start a family. But at a checkup with Lea’s OB, the couple learned that Lea has developed Asherman’s syndrome, a buildup of scar tissue from the D&C she underwent a year ago. The condition will make it difficult for Lea to conceive, and even more difficult to carry a child to term. The doctor warns that it wouldn’t be safe for Lea to get pregnant now… and it may never be safe again.

Afterwards, Shaun attempts to send good vibes into the universe and lift Lea’s spirits in clinical terms. He explains to his wife that a hysteroscopy would improve the odds of conception, and the live birth rate in pregnancies after Asherman’s treatment is a not-terrible 67 percent. But at the end of the day, all Lea wants to do was go home and cry — and who can blame her? The first miscarriage was difficult enough. The idea of going through that again is just brutal. 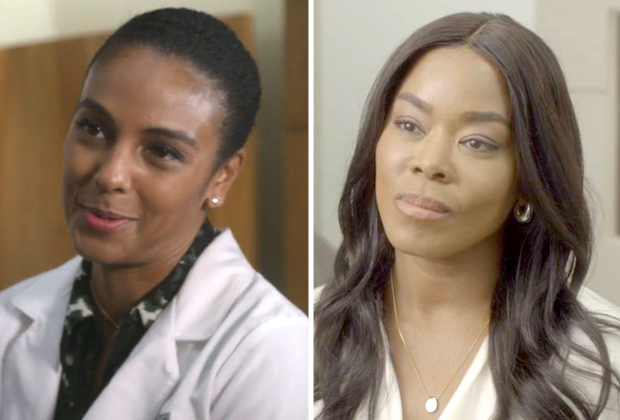 * Recast alert! Andrews was reunited with ex-wife Dr. Isabel Barnes, now played by Girlfriends‘ Golden Brooks. Since their separation (and subsequent divorce) played out off screen — Isabel was last seen in Season 1, when the role was occupied by White Collar‘s Marsha Thomason — this episode offered some long overdue closure, while also leaving the door open for reconciliation. After acknowledging that they both gave up on their marriage, Andrews and Isabel agreed how nice it was to hear that their patient and her husband found their way back to each other after drifting apart.

* Park offered to be Morgan’s sperm donor — no strings attached — but she declined. She explained  that it would hurt too much to see her ex whenever she looked at her child.

* Lim had her first date with Clay. She would later discover that it was Powell who played matchmaker, having texted the pediatrician and suggested that he bring takeout to the hospital.

* The case of the week — a woman pregnant with sextuplets! — got Asher and Jerome thinking about their future. Asher was initially opposed to kids, but eventually came around to the idea of one day starting a family with Jerome.

What did you think of The Good Doctor Season 6, Episode 7: “Boys Don’t Cry”? Sound off in Comments.

Why I will always love The Bodyguard