‘The Challenge USA’ Premiere Recap Episode 1 — Who Was Eliminated?

CBS reality shows have been known to starve contestants, deprive them of their privacy and drop them into a heart-pounding race around the world. But now, it’s time for a new challenge.

In The Challenge: USA, cast members from Big Brother, Survivor, The Amazing Race and Love Island gather at a new compound in Buenos Aires, Argentina for what should hopefully be one of the biggest challenges (no pun intended) of their lives. At the top, we’re reintroduced to players like BB23 winner Xavier Prather, Survivor victor Tyson Apostle, ex-pro footballer Danny McCray from Survivor 41 and many more (meet the entire cast here). But before we can get too cozy, host T.J. Lavin interrupts the meet-cutes and the cast’s reaction is a big one. (Glad to see they’re showing respect for our man Teej here.)

T.J. tells them that this show is built differently from what they’re used to, and that they’ll be faced with challenges and eliminations that will be “harder than anything you’ve ever done before.” (Uh, I don’t know, man. Survivor looks pretty dang hard to me.) Then he announces the prize money will be $500,000 (which, for the uninitiated, is likely — but not always — $250,000K for the top male and female performer).

Additionally, each player is going to have a seed of $1,000 in his/her personal Challenge bank account. To qualify for the final, they must accrue at least $5,000. They can bank money by winning challenges and/or eliminations. He also tells them they’re playing to earn a spot in the international Challenge tournament, which will stream exclusively on Paramount+ at a date TBD. (That series will pit them against winners from other shows happening all over the world.) 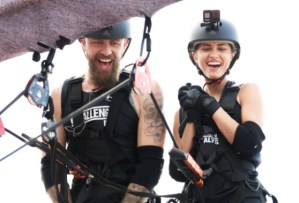 As the cast gets to know one another, Alyssa says she can’t wait to get her revenge on The Cookout — the majority alliance that ran Big Brother 23 and duped her until the very end. Seconds later, Cookout head honcho Xavier tells us via interview that Alyssa is one of his closest allies and he knows she’ll have his back… soooo this could get interesting! Derek (who’s also from the same BB season) tells us Alyssa is his one of his closest allies, and he’s totally down for getting some payback on The Cookout foursome (which also includes Tiffany, Azah and Kyland). Let the games begin!

Now, I’m admittedly a bit torn on the whole Love Island of it all. Should dating show contestants really have been included? One could argue yes, since Are You the One? kids invaded the flagship series (and gave us some quality challengers like Devin, Tori and Kam). But then you have Shannon, who tells us she did three or four pushups and her entire body is sore. And they didn’t even have their first challenge yet! Needless to say, some of the Love Islanders might be in for a rude awakening.

CHALLENGE DAY | For their first competition, players will compete in coed pairs, and since T.J.’s feeling generous, he lets them choose their partners… this time. In “Down to Do the Math,” teams must repel down a 22-story building, solving a series of equations on the way. Then, they must place the answer in the answer key on the ground. They have three chances to get it right, otherwise they must trek aaaall the way up to the roof to try again. The team to get it done the fastest will win the challenge, be safe from elimination and win $5,000 each for their personal bank accounts. The losers are going straight into the Arena for possible elimination.

Azah and Kyland get down the building fast, but a tiny math mistake sends them back up to the roof. When they finally answer correctly, Azah nearly collapses and Kyland carries her to the shade before she passes out. (Well, we all saw how she performed in BB competitions, right? Welcome to The Challenge, Azah!)

Derek and Cashay perform well, as do Leo and Tiffany. But then “Thor and Wonder Woman” — aka, Angela and Tyson — FLY down the building and crush the math element, so they’re looking like the team to beat.

Only one team had to run back up to the roof, so it’s no surprise that Kyland and Azah are this week’s losers. The top three teams, separated by only 17 seconds, were Danny and Shan, Tyson and Angela, and Desi and Cinco. But the one team to get it done the fastest: Tyson and Angela! The winners must now go back to the house, deliberate and decide which team will go against Kyland and Azah in the season’s first Arena battle. 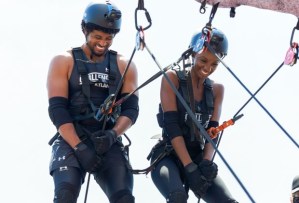 DELIBERATION | Angela and Tyson speak with the losers, and they immediately start discussing duos that have zero Big Brother or Survivor players in them. After the meeting, Tyson and Angela agree to be each other’s ride-or-die until the very end. But can they trust each other?

Rumors that Shannon doesn’t want to be there are top of mind for everyone involved. James, Shannon’s current partner, knows the target is on them since they are a Race/Island duo, and he goes to work to make sure their names are left out of the deliberation. But will he succeed?

ARENA | TJ calls Azah and Kyland down to the sand, but of course they need some opponents. So who’d Angela and Tyson pick to go in? Love Island duo Cely and Javonny.

In an elimination we’ve seen 900 times before, teams must weave a rope through a triangular structure, knotting it up as tightly as possible. Then, the teams will swap sides. The first team to successfully untangle the knots their opponents made stays in the game and accrues the losers’ bank accounts as well.

At one point, it seems like Azah is gassing out, but when the camera gives us an aerial view, it looks like the Love Island duo is toast. When all is said and done, Big Brother 23 wins the first elimination, banking an extra $1,000 each.

After sending the losers on their way, T.J. says he has one more thing to show them. He reveals a board that has all of their names on it and a bunch of blinking lights. It’s called the Algorithm. And it’s about to randomly select their next partners!

So Challenge fans: How’s the CBS iteration faring so far? And if this was the first Challenge episode you’ve ever seen, will you keep watching? Grade the premiere, then drop some comments below!

Beyoncé Makes History on Billboard Hot 100 With ‘Break My Soul’

Beyoncé Makes History on Billboard Hot 100 With 'Break My Soul'

Bones and All Movie Review

Where to Stream ‘Zootopia+’ Animated Series Based on Disney Movie