We thought things were starting to settle down as we approached the homestretch on The Bachelorette — and boy, were we way off. 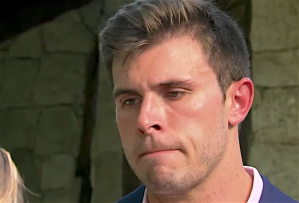 After some pointless live filler with host Jesse Palmer, Tuesday’s “finale” (this is just Part One; the actual finale airs next Tuesday) takes us right back to that tense rose ceremony, with Zach abruptly pulling Rachel aside just as she’s about to hand out her two roses. He tells her their time in the fantasy suite “felt a little off,” and he felt like he was seeing “Bachelorette Rachel, not the real Rachel.” (Ouch.) “I did really love you,” he tells her. “I saw a future with you. But I need to go.” And she doesn’t seem all that bummed that he’s leaving? Maybe she was about to dump him anyway.

As Zach tears up in the SUV, questioning if what they had was real, Rachel returns to the rose ceremony and tells Tino and Aven that she’s “disappointed” that Zach “questioned my character” — and she looks happy to hand her two roses to her two remaining guys. On the live show, Rachel and Zach trade apologies and make nice… but we’re still not sure what really happened here? It almost seems like Zach got scared and sabotaged the whole thing at the last minute. Anyway, on with the show! 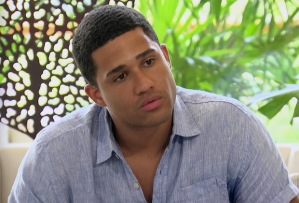 Rachel then brings in Aven to meet her family, including her famously overprotective dad Tony, who pulls him aside for the requisite grilling. Aven handles that well, but he stumbles a bit with her friends, admitting he’s not really ready to get engaged this very minute. Uh-oh. Rachel’s friend calls it “a red flag,” and when Rachel hears this, she’s stunned — because that’s not what he told her!

She sits down with Aven and shares her concerns, and he’s not all that reassuring: “I want to get to that point with you so much.” So you’re not at that point now, then? She thought they settled all of this already… but guess not! He gets frustrated and defensive, to the point where she has to ask, “Why are you yelling at me?” (Which is not a great sign.) They kiss goodbye, but it feels like goodbye for good. “I’m not sure how to move forward from it,” Rachel says before dissolving into tears. Let’s make sure this girl is properly hydrated, because we get the feeling she’s not done crying yet. 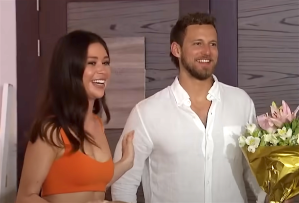 Well, Gabby’s already down to her final guy Erich, so this should go a lot smoother, right? (Please?) She brings him in to meet her family, including her adorable grandpa — who already tagged along on their bowling date, remember? He thinks Erich is “a keeper,” and the rest of the family seems won over… but we’re a little worried that Gabby isn’t smiling while she’s watching this back on the live show? She still worries that she’s “unlovable” after what she went through with her mom, but she and Erich seem happy and giggly as they say goodbye. Can we get at least one happy ending around here? Fingers crossed! 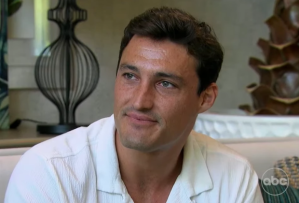 Now it’s Tino’s turn to meet Rachel’s family, but she’s still rattled by what happened with Aven, and now she’s questioning everything. She explains to her parents that Tino’s family “didn’t like me,” and her mom notices that she’s not “gushing” like she was with Aven. And Rachel looks grim-faced while she’s watching this back live, too! What is happening?!

Rachel’s mom interrogates Tino about his family, but he knows they’ll love her, “because I do, so they don’t have a choice.” OK, then! Rachel’s dad is a little concerned about how their careers might conflict, too, but Tino tells him directly: “I’m gonna make your daughter happy forever.” Is this guy maybe just a little too confident? Rachel is happy with how it all went… but she’s also not ready to shut the door on things with Aven just yet. 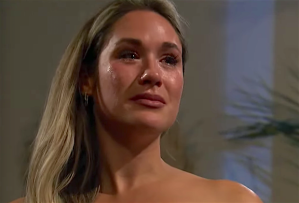 Rachel visits Aven in his hotel room, and he tells her how crushed he was to let her down. “But”… he does want them to spend more time together before they get engaged. Oof. Tears stream down her face as she tells him how blindsided she felt by what he told her friends, and though he keeps saying he wants to be with her, he admits he may have gotten “caught up” in all of this when he told her he was ready for an engagement. He can’t give her what she needs, and that’s that. “I can’t go forward,” she says. “It’s over.” He tries to apologize, but the damage is done.

They hug goodbye, and Aven takes the walk of shame, roller bag in hand, still insisting they would’ve “gotten there” as a couple if they just had more time. Well, this is The Bachelorette, buddy. You don’t have any more time! When Jesse asks Rachel on the live show if she’s still fighting back tears, she cracks: “I’m always fighting back tears, Jesse.” (Fact check: True!) They bring out Aven for an uncomfortable reunion, where they say all the same stuff over again. Except Jesse asks him if he thinks Rachel’s friends “sabotaged” their relationship, which: Huh? Trying to stir the pot, Jesse? 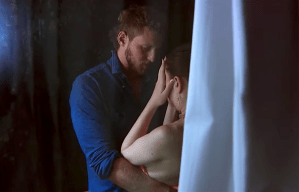 Finally, it’s time for Gabby’s final date with Erich, and this should just be smiles and kisses, right? They cuddle and talk about how strong their bond is… and then Erich says he doesn’t want to “rush anything” or do “anything that wouldn’t be natural to us.” And suddenly, the music stops. She presses him on whether he wants to get engaged, and he seems very unsure, and that makes her feel unsure. “I just want to date you,” he says, and he doesn’t want to get engaged before they get a chance to do that. What show do these guys think they’re on?! Gabby storms off, shattered:  “So here we are. Big fat dumpster fire. Big f–king mess.” Yeah, pretty much.

In the preview for next Tuesday’s finale, Gabby and Rachel both get ready for the final rose ceremony… but will either of them get a proposal? Tino tells a producer Rachel is “throwing me under the bus,” and she tells him: “Look me in the eyes, and lie to me again.” Things get ugly between them, and Rachel says she feels “blindsided” and “betrayed,” declaring: “I’m done.”

Got thoughts on tonight’s episode, Bachelor Nation? Predictions for next week’s finale? Drop ’em in a comment below.

Discover the radical energy of this unsettling psychodrama

How to Stream ‘Halloween Ends’ Horror Franchise Finale on Peacock