The Southlanders and Númenóreans had no time to celebrate their perceived victory over Adar’s forces.

This week’s The Lord of The Rings: The Rings of Power found the humans immediately ravaged by ash and smoke and fire after that catastrophic volcano eruption from what we assume is Mount Doom. (Mount Doom is where Frodo destroys the One Ring thousands of years later.)

CHAOS IN THE SOUTHLANDS | Galadriel found Theo, who was ready charge at the first orc in sight for destroying his homeland. But they were outnumbered, and fighting for the now barren Southlands was a lost cause.

When it came to loss, Galadriel had her share. Not only did her brother Finrod die, but the elven commander also revealed that she lost her husband Celeborn. He went off to war — in armor too large for his frame — and never saw him again. This deviates from Tolkien canon because in the books, Celeborn lives and founds the elvish realm of Lothlórien with Galadriel. He eventually sails to the Undying Lands to be with his wife and their daughter Celebrían, who left Middle-earth before him. Whether he’s dead or just missing in Rings of Power remains to be seen.

Elsewhere, Míriel and Valandil survived the wreckage, but Isildur was presumed dead after a roof collapsed on him. This devastated Elendil, who was also tasked with hiding that Míriel was now blind after being struck by fiery debris. 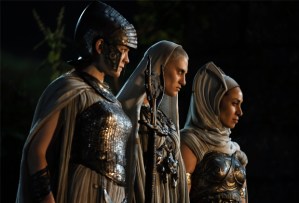 AN UNEXPECTED JOURNEY | The Harfoots reached an area of land that was usually green but had been scorched from the eruption. The Stranger again lost control of his powers and nearly crushed Nori and a Harfoot child under a branch. Sadoc handed him a map that might help him find the stars he sought, and the magical being went on his way. Meanwhile, the previously scorched lands were now vibrant and overflowing with fruits and vegetables thanks to the Stranger’s magic. Could it be… Have they landed in what will become the Shire?

Remember that sinister trio who were suspiciously interested in the Stranger’s crater? Well, they caught up with the Harfoots and burned the entire caravan. But true to their resilient spirit, Nori’s father urged his devastated community to gather what they could and keep it moving. Nori decided to go after the Stranger and warn him of the enemy that was tracking him, and was joined by her parents, Poppy, and Sadoc.

A DOOMED BROMANCE | In Khazad-dûm, Elrond and Prince Durin pleaded with King Durin III to mine for mithril, which would be the elves’ salvation. But not even the promise of game, grain, and timber from the elder forests of Eriador for the next 500 years could sway the king. Elrond even kneeled before the dwarf royal and begged for their aid. Still, King Durin refused because he didn’t want to “risk dwarves’ lives to help the elves cheat death.” Knowing this decision doomed his friend to death, Prince Durin was beside himself. That’s when Disa suggested they reopen the mines themselves and force King Durin’s hand. But Durin didn’t want to set that precedent for his children. After seeing how a piece of mithril — which Elrond returned — healed the wilted leaf from Lindon, he changed his mind and called the elf back to go mining. 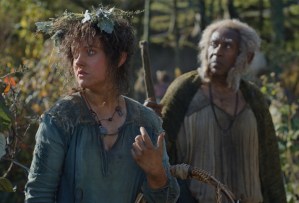 They found astonishing quantities of mithril hidden in the cracks, and that would be a game changer for the elves. But they were soon caught by King Durin, who kicked Elrond out and then pulled his son aside for a private conversation. Prince Durin again pleaded for his friend’s life, also calling out his dad for potentially squandering their future. He was ultimately stripped of his princely collar.

As Durin commiserated over being a failure, Disa reminded the prince that he would one day inherit the dwarven kingdom. They would rule together, and that mithril belonged to them. One day, they were going to dig.

King Durin tossed the leaf from Lindon into the mines with mithril, and it burned as a Balrog emerged from the shadows.

NEW BEGINNINGS | At the Númenóreans’ encampment, Elendil mourned his son Isildur and expressed regret for bringing Galadriel to the island in the first place. Theo, on the other hand, was relieved to be reunited with his mother Bronwyn and (stepdad?? biological father??) Arondir, who were both still alive.

Galadriel, filled with guilt, kneeled before Míriel (who now wore a blindfold over her eyes). Elendil couldn’t stand to even look at Galadriel as he informed the queen their ships were almost ready to go. Míriel vowed to return to Middle-earth, but Galadriel knew she wouldn’t keep her promise.

With their home now destroyed, the Southlanders were headed to Pelargir, an old Númenórean colony with fresh land for them to live on. (Spoiler alert: Pelargir will eventually become Gondor’s naval port.)  This would also mean a fresh start for Bronwyn, Arondir and Theo.

Speaking of pairings with chemistry, Galadriel reunited with an injured Halbrand, who was found on the road in all the chaos. (Note: But was he really? Do we believe anything with him? He’s gotta be Sauron, right?) The King of the Southlanders needed elvish medicine, which meant he and Galadriel were to ride to Lindon.

Elsewhere, Adar declared the Southlands the orcs’ home, and gave it a new name: Mordor.

With just one episode left in the season, what do you hope to see in Rings of Power?

How Slipknot’s Root + Thomson Dealt With Their Depression

”With film, I used to be the first person to see a performance”