Instead of returning home, Ben’s jump in this week’s Quantum Leap found him in the body of astronaut David Temura aboard the space shuttle Atlantis in 1998.

After finding Ben’s video and a mysterious jump drive, Addison was understandably upset that her fiancé was keeping secrets from her — especially since they fell in love while working together on the Quantum Leap project and dedicated years to getting it up and running.

When she suggested to the team that they jog Ben’s memory for answers, Magic immediately shot down the idea. He believed that it was far too risky, given that Al’s daughter Janice was somehow involved. Until they understood Ben’s motivation for the unauthorized leap, he deemed it best to keep the time traveler out of the loop. That didn’t stop Addison from secretly teaming up with Ian to figure this out, one way or another.

What was clear, though, was that Ben leaped into David to save his life. The astronaut was supposed to die on this day, and they needed to figure out how to prevent it. Right on time, the shuttle malfunctioned after an explosion, and their leader Reynolds suffered a concussion. Ben/David also survived, but David’s fate had not changed, which suggested he must have died from something else. 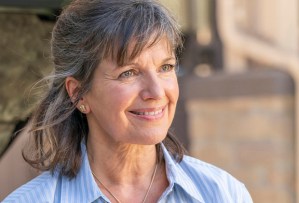 Elsewhere, Magic paid a visit to Al’s widow Beth (played by Susan Diol, who reprised her role from the original series) for clues about Janice’s whereabouts. Beth told him she hadn’t seen her daughter since Al died over a year ago, also feigning concern about the Quantum Leap project. Magic avoided answering her question and abruptly ended the visit, getting exactly what he needed from their conversation. He was able to trace Beth’s call to Janice immediately after he left and brought Jenn to the address linked to the phone number.

They discovered what looked like Janice’s base of operations in the basement and quickly realized they were being watched. That’s when Janice called Magic’s phone, revealing that Ben approached her for help, not the other way around. The basement then self-destructed, but not before Jenn grabbed one of Janice’s hard drives.

Back in space, the team concluded that Ben/David needed to make an emergency spacewalk to fix the shuttle. That’s when we learned David died on this walk after being struck by debris. Ben, in David’s body, survived the debris, but that altered everyone’s fate for the worse. The flying objects damaged some of the tiles, and the explosion upon reentry into the earth’s atmosphere would kill everyone on board.

The astronauts debated what to do about the tiles. Reynolds and Everett thought the shuttle was fine as is — not knowing Columbia exploded in 2003 under similar circumstances — while Ben and Stratton believed the damage was far more substantial than they thought. Stratton then suggested they ask for help from the Russians, who were nearby in the Mir spacecraft. But Reynolds struck that down, calling it an embarrassment to ask the cosmonauts for aid. 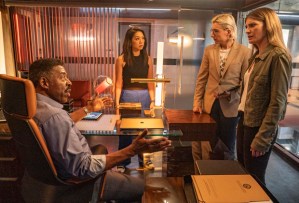 When Ben finally convinced Reynolds to listen to Samantha and reach out to the Russians, they ran into another issue. Their calls went unheard because it was the middle of the night, and the Russians were asleep. Taking a leap of faith, Ben unlatched his safety tether and literally flung himself onto the Mir to bang on the Russians’ door. The risky move worked, though, and Ben’s fate was altered. Everyone aboard Atlantis would make it back safely, with Stratton becoming a shuttle commander and David earning a spot as one of the first astronauts on the International Space Station once it’s completed.

With his mission accomplished, Ben had a 50/50 shot at returning home with his next leap. Addison promised that no matter what, she would be with him every step of the way. Unfortunately, Ben didn’t make it back and remained stuck traveling through time and space.

Magic apologized to Addison for not telling her about Janice earlier and conceded that the discussion on how to handle Ben’s situation should have been a group decision. This squashed the earlier tension, and they were all in agreement that Ben should be kept out of the loop until they learned more.

Remember that thumb drive Addison found? Well, it contained millions of variables of different places in time, with one particular destination singled out. Ian inferred that Ben may have jumped to get to a specific time and place, but the where and why remained unclear.

As for Ben’s next jump, he landed in the body of a boxer. Before the physicist could get his bearings, he took a mean punch to the face. Ouch.

Santigold Cancels Her 2022 Tour Due To Challenges

Japanese Breakfast opens up about ‘The Great British Bake Off’ collaboration