And just like that, Russell Tan (in Kerwin’s body) is dead.

Kung Fu‘s Season 2 finale on Wednesday saw Zhilan sacrifice herself to defeat the crime lord once and for all — saving Nicky, Mia and the rest of the world in the process. For Olivia Liang, who plays Nicky, Zhilan’s heroic gesture marked a full-circle moment for the guardian and warrior, who’d been at odds with each other for two seasons.

“I was sobbing reading the finale when she said, ‘Go home, little monk,’” Liang tells TVLine. “I was like, ‘Man, how has that now become a term of endearment when [Zhilan has] been poking fun at Nicky for being a Shaolin [practitioner]?’”

But is Zhilan’s death permanent? The Kung Fu star isn’t so sure. “It can’t end there. I would love to see more of [Nicky and Zhilan’s] dynamic in the upcoming season,” she shares. “We’ve introduced magic to the world, so it wouldn’t be the craziest thing if she managed to survive. But I don’t know what [the writers] have planned.” 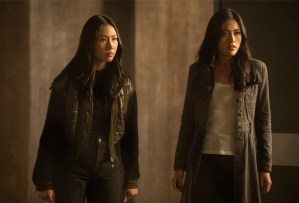 The magic from the spirit world seems to have released Nicky’s shifu Pei-Ling, who is seen in the hour’s final seconds near the Golden State Viewpoint trail, into the real world.

“Is it Pei-Ling, or is it Xiao, or who is it?” Liang adds, noting that “if that magic really did release whoever was in that realm, then I’m excited to see who else comes out.”

Meanwhile, Henry, who watched his estranged father die in his arms, decided to find out more about his dad’s intriguing life. With this new quest taking him out of town and away from Nicky, they both concluded that the best thing right now was for them to break up.

Liang knows this will devastate “Hicky” fans, but says this isn’t it for them. “Clearly, they don’t want to break up, but it’s just life circumstances that are pulling them apart,” she explains. “I’m sure audiences are going to be bummed that they’re separated, but hold out hope that it’s not the end for them.”

With the series already renewed for Season 3, Liang looks forward to Nicky getting back to basics — and maybe letting her freak flag fly, now that she’s single.

“I would love to see Nicky go through a freak phase. I don’t know if that’s in the cards for her,” she shares. “I always thought it would be so funny to have Althea force Nicky to join a dating app and make her dating profile [say], ‘5’7”; very flexible.’ Something very Althea.”

What did you think of Kung Fu‘s Season 2 finale? Do you think Zhilan is gone for good? Grade the episode below, and then sound off in the comments.

A Flamin’ Hot Cheetos Movie Premieres on Hulu This Summer