Yes, Charmed fans, that really just happened. The CW drama wrapped its four-season run on Friday with a jaw-dropping, multiverse-confirming final scene that will have fans of both the reboot and the original series talking.

After reuniting Inara with her sisters and preventing another magical apocalypse, the current Charmed Ones — Mel, Maggie and Kaela — discovered a mysterious door emblazoned with their signature triquetra.

“Are we sure about this? Another world? Other Charmed Ones?” Mel asked the group. Maggie shared her sister’s skepticism, but Kaela insisted that this is where fate has led them.

So, what was on the other side of that fateful door? No big deal, just… Halliwell Manor! “This house feels oddly familiar,” Mel noted as the trio found themselves standing outside the very home where Prue, Piper, Phoebe and Paige honed their craft in the original Charmed.

“I guess we should see who lives here,” Maggie suggested, but a knock on the door revealed that no one was home. After another push from Michaela, Maggie agreed that they should enter the house, which (as fate would have it) was unlocked. “We’re stronger than we have ever been,” she said. “I know that we can handle whatever we encounter on the other side of that door.”

The episode (and series) ended with Mel, Maggie and Kaela entering Halliwell Manor and the doors magically closing behind them.

Is your mind completely blown? Ours were. Fortunately, executive producers Jeffrey Lieber and Joey Falco were happy to field our burning questions about that swing-for-the-fences final scene:

TVLINE | Was the season always going to end this way, or did you do this because you knew weren’t coming back?
FALCO | We wrote and shot this episode before we knew the show was going to end. We knew for months that there was a 50/50 chance of us getting canceled, so we wanted to end on something that could move forward but could also be a satisfying conclusion. We wanted to eventually tie these universes together. We were going to do it in a much bigger, crazier way at a certain point, but since we knew there was a chance we were getting canceled, this was the sweet spot where we felt like we got to do what we’ve always wanted to do — make it a Charmed multiverse — but also end in a way that’s hopeful and satisfying and wraps up everyone’s emotions.

TVLINE | That’s a heck of a set-up. What would you have done if the show had gotten renewed?
LIEBER | We were looking to start next season with the universes knit together, and then we would have seen [which cast members were] around and amenable. We would have, in the first five minutes of Season 5, dealt with how those universes were knit and then would have moved back into our world again. What was really important to us this season was to create something large and stable. We kept going back to what the Spider-Man franchise did. We wanted there to be one world everyone could exist in.
FALCO | We certainly had a plan for where Season 5 was going. There were going to be phone calls made about which cast members are available and who’s willing to do it. We had a very flexible plan based on [those logistics], but we never had those conversations because we weren’t going to have them until we got a pick-up. So we’ll never know who may or may not have made an appearance.

TVLINE | So no phone calls were made about getting anyone for a cameo in this final scene?
FALCO | Right. We were never going to do it in this season. It was all about launching Season 5 with that.
LIEBER | There were two separate concerns. First, this show is this show, so we wanted to end this season with these characters. Then there’s the bigger idea of the franchise, and we wanted to do honor to that. But we never wanted this season to end with anything other than these three sisters — Mel, Maggie and Michaela — and to wrap them up in some way. 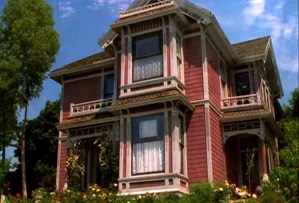 TVLINE | Were you on set the day this scene was shot? It must have been a big moment.
LIEBER | Well, there’s a story there: The three of them on the porch was shot in Vancouver. Our wonderful crew built a [replica] of the porch. But when the pullback happens, that was shot in LA [at the house used for exteriors on the original Charmed]. This idea started with Joey, who suggested it as a way to end the season. We tried to get a hold of the house, but we couldn’t figure it out. We had brought on a writer named Adam Lujan towards the end of the season, and when we were talking about our frustrations, he was like, “I know the guy the landlord of that house!” Two hours later, we had access to it. It was fantastic.
FALCO | It was fate, honestly. It was kismet. It’s something we’ve really been excited to do for a long time. … Jeff and I were both there, and we have lots of pictures at the Charmed house that we’ll have to post [after the episode airs].

TVLINE | I have to ask: Was it Prue or Macy who closed the door at the end?
FALCO | That is a great question… that I think the fans can debate. I certainly have a thought, but I don’t think we should make it canon, because I feel like it’s up for debate.
LIEBER | This fanbase is hyper-specific and obsessive about everything, and we get a lot of questions online about what the truth of things are. And we’re about to enter a period where there are a bunch of questions that probably won’t have answers. To that, we say, “You guys answer it!” Somewhere down the line this thing’s going to be picked up by somebody and they will move forward, and all I can hope we did is leave behind a cohesive universe that someone can take and [work] with. That’s what this last season was about, putting everything in the same place.

TVLINE | I’m bummed we won’t get to see that happen, but even the idea of it feels somehow satisfying.
FALCO | And even though this show has ended, these ladies’ journey doesn’t end. They’re still fighting. We weren’t going to end with them sitting around a table reading stories to their grandkids like the original show did. The battle continues, which is where we want to leave the audience. They’re still out there fighting.

We’ll have more Charmed finale coverage coming this weekend, including more about what fans would have seen in Season 5. For now, grade the finale in our poll below, then drop a comment with your thoughts on that ending.

Justin Bieber Reveals Battle with Virus That Paralyzed His Face

“I felt that the camera cannot be a voyeuristic lens”