by admin
in MUSIC, TV

Rising Australian band Lipstereo, introduced by radio guru Paul Cashmere from Noise 11, did a triumphant performance, featuring lead vocalist Sam Stranges during the Let Me Help, Inc “Children of the World” benefit spectacular on October 1, 2022. The concert was globally streamed and artists from everywhere on the planet took part in the celebration presented by FENIX360 and WOW TV, produced by MD25 and hosted by John “SohoJohnny” Pasquale. 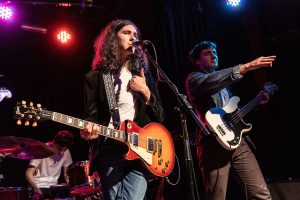 The faction hailing from Melbourne began their journey in 2019. The members include frontman Sam Stranges on vocals and rhythm guitar, Andrew Stainsby on lead guitar, Tage Hosking-Gregory on bass and Jesse Porter on drums. As an alternative band they have recently completed their four-track debut EP entitled “Modern Mythology.”

The Let Me Help foundation was created by host John “SohoJohnny” Pasquale shortly after his own mom died due to the Covid virus. John had the wish and the insight to raise money for those whose lives were impacted by some unfortunate circumstance through the power of music and laughter.

Donate to the Let Me Help, Inc. Children of the World Benefit here: https://letmehelp.swigit.com/app/childrenofworld

Moneybagg Yo and Glorilla Join Forces in Video for New Song “On Wat U On”: Watch

Why Did It Take 13 Years to Make ‘Avatar: The Way of Water’?

The Associates’ Alan Rankine Dies at 64

Tim Allen Flashed Me on Set of Home Improvement