Palaye Royale will release their new album, Fever Dream, on October 28 via Sumerian Records. Made in collaboration with Grammy-nominated producer Chris Greatti, the 13-track set came to life over the course of a year, with the band working in deliberate seclusion and taking abundant time to sculpt each lavishly orchestrated track. The resulting set is their boldest and most visionary body of work to date.

Alongside the announcement of Fever Dream, Palaye Royale has released the album’s title track. One of the album’s most majestic tracks, “Fever Dream” is a throat-shredding epic, opening on a moment of piano-laced reflection before morphing into a triumphant anthem, fully embodying the transcendent spirit that’s earned the band a cult-like following through the years. The accompanying video will be released July 14 at 9 PM, PT. Directed by Italian filmmaker Gianluigi Carella, the video was filmed in part at LA Circus and depicts frontman Remington Leith’s epic journey in a fever dream of his own making. Tune into the live chat room countdown to the premiere and watch the exclusive teaser here.

Listen to “Fever Dream” here, and below.

Palaye Royale recently teamed up with MARVIN and Porsche to film an episode of Sound and Driven, a short film series featuring some of music’s respected artists and producers as they take their records on the legendary car test in a Porsche Taycan. In their episode, the band and producer Chris Greatti discuss the recording process of “Fever Dream,” driving through the streets of LA while listening to the epic song. Watch their video below:

Their fourth full-length album, Fever Dream emerged from a much-needed break in the chaos, with the trio returning to their roots and composing most of the album on piano, resulting in a body of work that is equal parts ecstatic head rush and in-depth meditation on the state of the human psyche. Palaye Royale explains, “Making this record felt like getting back to when we first fell in love with music.” They continue, “This record is very much about self-belief and self-empowerment, and overcoming all the obstacles that life throws at you. It’s the first time we’ve really taken a hopeful approach in our music.”

The band has been teasing out glimpses of Fever Dream throughout the last year, including new single “Broken,” which just impacted Alternative Radio and is currently climbing the charts. Other sneak peaks include the confessional “Paranoid,” the darkly addictive “Punching Bag,” and the undeniably infectious “No Love In LA,” the latter of which was the band’s fastest-growing streaming track to date, gaining major traction at Alternative Radio upon its release.

This Fall, Palaye Royale will bring their adrenaline-fueled, rock n’ roll circus on an expansive North American headline tour with direct support from Mod Sun. The 25-date run kicks off September 13th in Phoenix, AZ, and sees the band headlining their biggest U.S. venues yet, including House of Blues in Chicago, Webster Hall in New York and The Palladium in Los Angeles. Tickets are on sale now.

The tour continues a busy year on the road for Las Vegas-bred brothers Remington Leith (vocals), Sebastian Danzig (guitar) and Emerson Barrett (drums). With unparalleled swagger, Palaye Royale have endlessly delivered an electrifying live show, one that frequently finds Remington hanging from the rafters. Earlier this year, they were direct support on Yungblud’s North American tour, followed by a completely sold out headline tour across the UK and Europe, which included their biggest headline shows to date, including the Roundhouse in London and an arena in the Czech Republic. Later this summer, the band will hit the European festival circuit before heading back to the states for their headline tour. They will also perform at the highly-anticipated When We Were Young festival in Las Vegas on October 22 and 29.

Equal parts brit-pop, glam rock and art-punk, Palaye Royale has amassed over half a billion streams throughout their career and earned a legion of cult-like fans with their fast-paced dirty rock’n’ roll. First landing in Los Angeles as teenagers, the brothers worked their way up through the ruthless L.A. rock scene going from playing basement shows while living out of their car to headlining arenas around the world. And whether they’re taking the stage at major festivals like Reading and Leeds, Download and Pinkpop or playing to sold-out crowds in such far-flung locales as Amsterdam, Prague and Mexico City, the band’s most crucial ambition is to deepen their rarefied connection with their beloved fanbase, lovingly dubbed the Soldiers of the Royal Council. 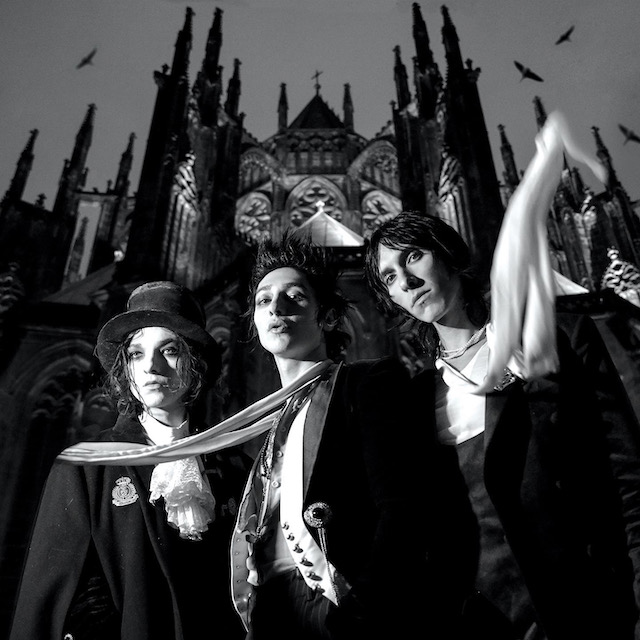 “King Of The Damned”

“Off With The Head”

Metallica’s “Master Of Puppets” Gets The Stranger Things” Push

Evan Peters Stayed in Character as Dahmer While Shooting Series

Will There Be a ‘Black Panther 3’? Marvel Isn’t Sure Yet