Brutal technical death metallers Nile have announced that they have parted ways with bassist/vocalist Brad Parris. A statement reads as follows:

It’s time for us to share with our fans and the metal community that Brad Parris is leaving Nile this year.  This is something that we have known about and have been working together with Brad through the transition. Brad has been an exemplary band member of Nile since 2015, conducting himself at all times with professionalism and integrity. He is parting under the absolute best of terms to focus on other projects and family concerns. Our friendship and brotherhood remain as strong as ever, and we wish him only the best as he continues his musical journey in life. Nile’s touring and recording commitments remain in effect. It is natural for a band that’s been going strong for 25+ years to have changes and we promise our fans to stay as true and brutal as ever! At this time we have a few strong candidates for bass/vocals, however any persons interested in auditioning should email nilebassistaudition@gmail.com.”

Nile recently announced they will be touring Europe and the United Kingdom, starting in November 2022, bringing their unique presence to the stages. Tickets for all dates are on sale now. See below for all currently confirmed tour dates.

Nile mastermind Karl Sanders says about the tour: “I am absolutely on fire with the news that Nile will be returning for touring in Europe with Massive Music. Fuck yes. Metal will take place!”

Drummer George Kollias adds: “It’s time to conquer Europe again and I couldn’t be more excited! This will be a great tour, we are super hungry to tour Europe again and we are looking forward to see all out fans there!” 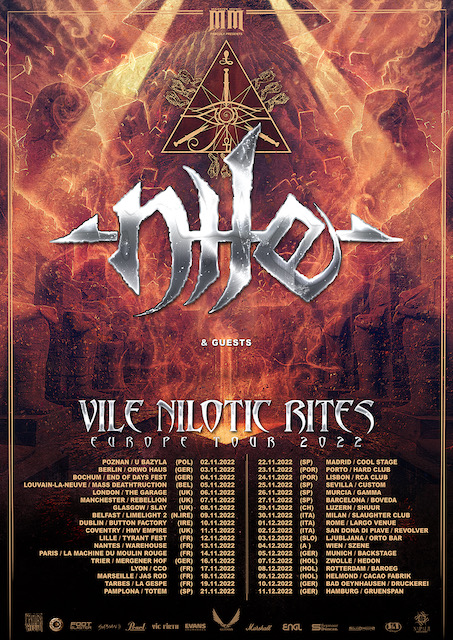 Zella Day turned her own abortion story into song

Billy Corgan on discovering Black Sabbath, aged 8: “This is what God sounds like!”

Architects fan listened to one of their songs 32,000 this year

Zella Day turned her own abortion story into song

What to Watch: Tulsa King, Rogue Heroes, Dead to me

New Sparks-Penned Musical in the Works