Legendary Drummer BOBBY JARZOMBEK Is Our Next Guest On SFV – “I’m A Little Bit Country, A Little Bit Heavy Metal”

From “Metal God”, to “Country God”. Literally. Bobby Jarzombek has travelled with the elite of heavy metal and now with the elite of country, drumming his way into the hearts of thousands as George Strait slowly rolls down his farewell tour, The Cowboy Rides Away, which has been galloping around the US since 2014. But nobody really wants to quit right?

Bobby Jarzombek is our next special guest on BraveWords’ Streaming For Vengeance, which will air this Saturday, June 18th on a screen near you! 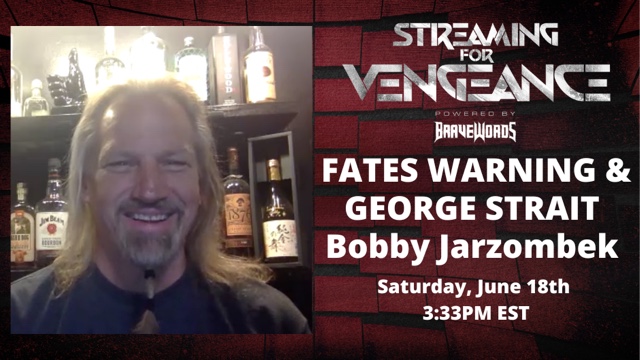 Although his resume includes an incredible list of hard rock royalty like Halford, Riot and Fates Warning (who he’s currently active with), country is not that far from his wheelhouse as you will see.

Jarzombek looks back: “In my youth playing heavy metal and hard rock from the ‘70s, with my brothers, we had a band together back then. We were playing the old Scorpions stuff, Rush, KISS, and all that. Those bands, but at the same time when I was in high school, I was playing country music around town. That’s how I was kind of making a living, playing drums, and continuing to do the metal projects and then also doing country music on the weekends. So, it’s always been both, although a lot of people don’t know me on the national scale, I would say, as far as playing country music. It always has been there with me, since high school.”

Jarzombek: “Well, George did that in 2014. He was a touring act at that time, doing 50 plus shows a year, and at that point he announced, ‘I’m not doing the big tours, I’m going to do selected dates’. And since then, he’s definitely kind of, he’s slowed down in the way that, the amount of shows. But not so much in the production and everything else involved, and keeping the band together and that sort of thing. It’s been a year since I’ve been with George and he’s been doing 12-15 shows a year, and that’s what he wants to do. He wants to pick his spots and still get out there and play because he loves it, you know.”

Jarzombek: “Well, I mean, I would say it’s difficult for somebody, because there’s a lot of guys that come up playing a certain style of music and then they’re like, ‘So-and-so has a country band, or so-and-so has a blues band and they want me to play in their blues band.’ And I guess maybe they approach it a little differently than I do, playing the two different styles. But I just think completely different when I’m playing a country song. And this is something I developed a love for, like I said, when I was in high school, listening to the lyrics and paying attention to the story of the song. If I listen to metal, I don’t know what the lyrics are. It doesn’t matter to me. There’s no connection between me and the lyrics of the song. Especially if you’re listening to death metal or something like that, you can’t even understand it anyway. I can’t, but hence, I love certain death metal bands, but I don’t have a connection to it at all, in those respects. But, with country music, I listen to the story, what the guy is singing about, or the girl, or whatever. And, I kind of approach it, you can say from a minimal approach, not to get in the way of the story of the song. Technique-wise, if you just want to talk animalistic drumming, there’s a lot more arm movement, a lot more power involved in metal, just because of the sheer volume of it, but with country, in a way it’s, to me, more technical in the way it’s – everything has to be placed perfect. I mean, in metal, sometimes you can just kind of go with it, but country had to be really precise, it has to be really in the pocket with the bass player, and that’s where my focus is. Keeping the time together and building the song. And you can hear when a song builds, there’s different dynamics in country music, where metal sometimes it will be all sort of one volume throughout the song, except for ’Beyond The Realms Of Death’ or something like that, where it kind of lends it’s approach to a dynamic song. But country has that in just about most of there songs. It does have dynamic range, and that’s what sort of taught me to learn that, by playing country music. I could go on and on and talk about little aspects of it, but to me it’s just a different approach. So when I’m sitting down at the kit and I’m playing a country song, I’m thinking completely different than I’m thinking when I’m playing a metal song. It’s what I’m feeling when I’m playing the music. So that’s how it sort of gears me toward what I should do and what I shouldn’t do, and how I should support the music. It’s a weird question, but it’s a valid one.”

BraveWords: It must be like a pinch-myself moment to be working with the King Of County. His accolades are incredible, especially him holding the record for most number one songs on all Billboard charts by an artist in any genre of music.

Jarzombek: “Yeah. And when I was playing in cover bands, I remember the first George Strait song that I was playing with a band. It was probably in 1982, or 1983, and it was the song ‘Fool Hearted Memory’. And I remember learning those songs, George songs, as they sort of came into being big hits at that time, from the early ‘80s. And whatever he had, it was always top, and that was probably his first big one. And he stayed on top of the charts. And the reason I think George is such a successful country artist is he has a little bit of that real old-school sort of country, like Merle Haggard, you could even say Hank Williams Sr. and his voice. He had that sort of thing and he also had sort of a modern sound at the same time. Plus he was good-looking and the chicks loved him when we was coming up and singing. I played all of those when I was playing around town, and in the Texas area, in local bands. I mean there was a time when I guess it got to the later ‘80s where he was clearly on top, and he just never turned back. I mean, it never wavered for him, for years and years. Of course there’s now new country and styles have changed and all that, but he’s the top of his genre. He’s like the Paul McCartney or whatever you want to call it, of country music. That’s what he’s been, and it’s unreal to have this gig. The thing about George is that, there’s a lot of artists like, if you know Garth Brooks and his career, where Garth kind of went away for a while, to raise his kids and all that sort of thing. But George has never gone away. He’s consistently put out albums every year and he has, you know, even though Cowboy Rides Away, he’s still playing. I don’t think, other than COVID and the pandemic where the band didn’t play for 18 months, other than that, he’s been there. Always playing and always recording.”

Stay tuned for more when Bobby Jarzombek guests on BraveWords’ Streaming For Vengeance this Saturday, June 18th at 3:33 PM EST. SFV can be viewed on the BraveWords Facebook page or the BraveWords YouTube channel.

For more information about Streaming For Vengeance, visit this location.

Is This a Hint About Beyonce's New Album?

Barbara Walters Dead: Watch Her ‘The View’ Farewell Tribute From 2014

Marilyn Manson Sued for 1990s Sexual Battery of a Minor

More Than Ever review – Not much meat on the bone