Progressive groove metal juggernauts, Jinjer, have once again beat the odds: the band announces today that with the support of the Ukrainian Ministry Of Culture, they have been granted a special exemption to exit Ukraine in order to help their countrymen the best way they can – through music. This also means that Jinjer’s upcoming EU festival appearances this summer are confirmed. The band will perform across Europe starting June 10 at Greenfiel Festival in Interlaken (CH).

Bassist Eugene states: “We are very honored to announce that together with the help of the Ukrainian Ministry Of Culture, we have successfully been granted permission to travel abroad as ambassadors of our country to raise funds and awareness about the war raging back home. This is a huge honor for us as a band and as citizens. We will do our part to make sure that this war stops as soon as possible! Come support, dance and scream your hearts out for Ukraine!”

Find the band’s tour itinerary here, and click here to see the special donation merch that Napalm Records and Jinjer launched to help raise funds for the people of Ukraine. 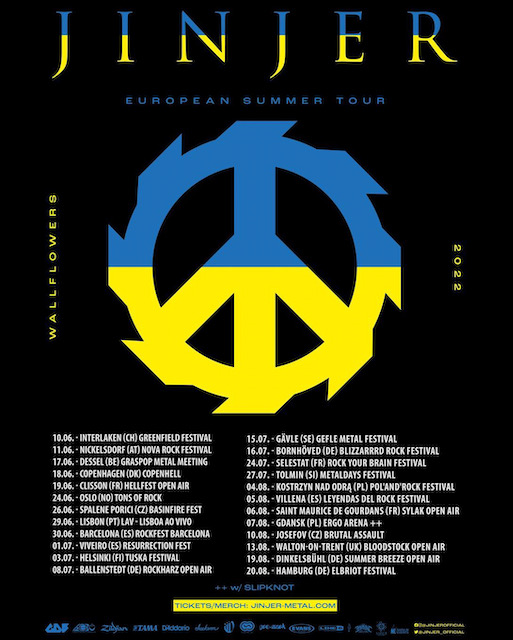 In addition to this exciting news, Jinjer released a surprise music video for “Call Me A Symbol”, taken off their latest album, Wallflower.

Eugene adds: “I think this video for ‘Call Me A Symbol’ will forever hold a special and unique place in our hearts as a band. Filmed on our short but awesome European Tour in 2021 tour that almost did not happen because of the pandemic, and now released at such a dark time in which our country has been invaded and there is war on the streets of our home. I really hope this video and this important time in history gives people a new perspective that there are always two sides to everything. Good and Evil, Just and unjust – cherish the good times and face the bad head on… but never ever give up.”

Chris Martin Explains How He Helped “Discover” The Weirdos

Meet The Chats: straight outta the bong shed and into the bar

Entertainment world and beyond reacts to Republican arrests

Andor Poster Teases The Beginning of the Rebellion

The Nirvana ‘Nevermind’ Lawsuit Was Dismissed for the Final Time