BraveWords: About the new single, it was mentioned that was it’s a reworking of an old song titled “Yesterday”. What made you want to revisit this song? Was it something that you always planned on doing?

Soho: “So ‘Yesterday’ was one of the first two songs we wrote as a band, along with the song ‘151.’  It was a staple of our early sets, but as we began the recording process with it, we decided the song needed an overhaul lyrically and I did a complete rewrite of the lyrics into ‘Suicide Tattoo.’

Donaldson: “We started recording it for a venture that didn’t end up panning out – had the artwork done up and everything, but things just didn’t end up working with that whole thing.  Then we had intended to include it on our debut album Lost In The City, but as we were finishing up the album, we really weren’t satisfied with where the song was at and decided to table it for the time being.”

Soho: “Earlier this year, I hit on this new idea for the riff that really felt like the missing piece for this song.  So we finally got back to resurrecting it after all these years.  It’s funny though because the new riff caused us to go back and rewrite most of the music for the song – and the lyrics had already been re-written – so it really is essentially a brand new song, but its evolution is kind of interesting from where it started all those years ago into where it’s finished up.”

Drake:  “Even down to the artwork. They originally had this cool black and white shot of a Boston skyline at night with the title written in a tattoo script. We decided to update the artwork to where we are now in Vegas and took a photo of Downtown Tattoo here to use as the background, but still used the same black and white color scheme with the same lettering on top.” 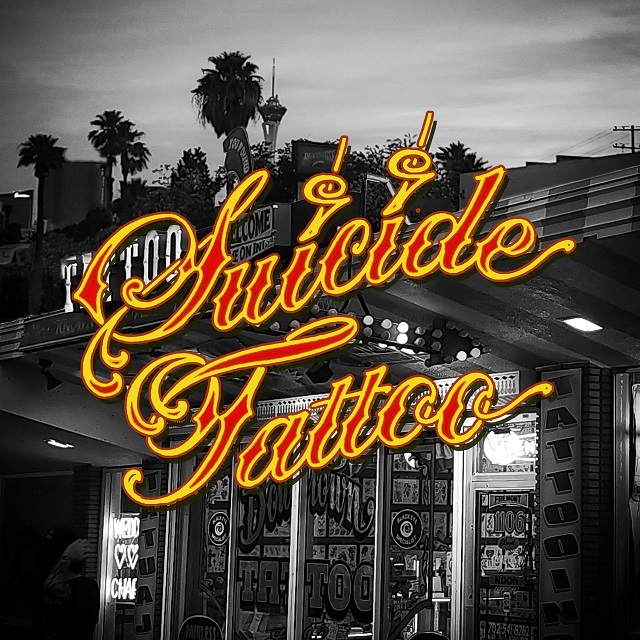 BraveWords: Where did the title and inspiration come from “Suicide Tattoo”?

Soho: “It was inspired by this girl we used to party with in the early days. She was always getting into something, doing a lot of stuff for attention, and she had a Kurt Cobain tramp stamp that I would hassle her about.  I wasn’t a big Cobain or Nirvana fan, but also thought that was a pretty funny concept for a tramp stamp-style tattoo so the song came out of all that.  It’s a little something about all the sordid type of shit we were getting into early on in this band.”

Donaldson: “It’s cool knowing where this song started out, when we honestly were pretty much just kids, and now seeing where it’s gone finally with the release.  It’s come a long way and we’ve been playing one incarnation or another of it for nearly the entire life of the band.  There are only a handful of songs like that for us – ‘151’ maybe ‘Diamond Boulevard’ or ‘Made For The Money’ that were there from the very early days.  It’s good to have it featured back in our set again.”

BraveWords: I hear you guys have something big going on with the iconic Gibson Guitars?

Donaldson: “We’re really psyched to announce our social media content partnership with Gibson. They’re sending us guitars every few weeks to demo and feature in our social media Reels.  It’s great to have them involved now.  Our stuff was reaching over 1.5 million views per month already and we’re excited to see the reach explode with Gibson sharing it to all of their followers!”

Tryon: “It’s cool to be involved with such an iconic brand and have the opportunity to work with them.  A lot of bands would kill for that opportunity.  I really hope they bring the Firebird back, that’s my favorite of the Gibson line and a lot of my favorite guitarists use them.”

BraveWords: Since the relocation to Las Vegas a few years ago, how has your songwriting changed, been influenced since being in a different environment/setting?

Tryon: “Growing up out here, this town exposes you to a lot quick in life and I think since joining the band in Vegas, the members that have lived out here longer bring a different perspective to the writing.”

Drake: “I was born out here and you get a little numb to the stuff in this city.  Living in a place people come to go completely wild, it gives you kind of a very different baseline on what’s normal.”

Terranova:  “Also even just listening to music when you’re growing up out here, some stuff just doesn’t match up with your experience in Vegas.  You look out the window, and it’s sunshine and palm trees and partying all year round here and, I dunno, the depressing stuff or some of this other music just doesn’t vibe with the environment.  This band and what we’re doing is so Las Vegas – from the western blues influence to what we write about and us all going out on the town.  It’s pretty apparent Crash Midnight was born for this town.” 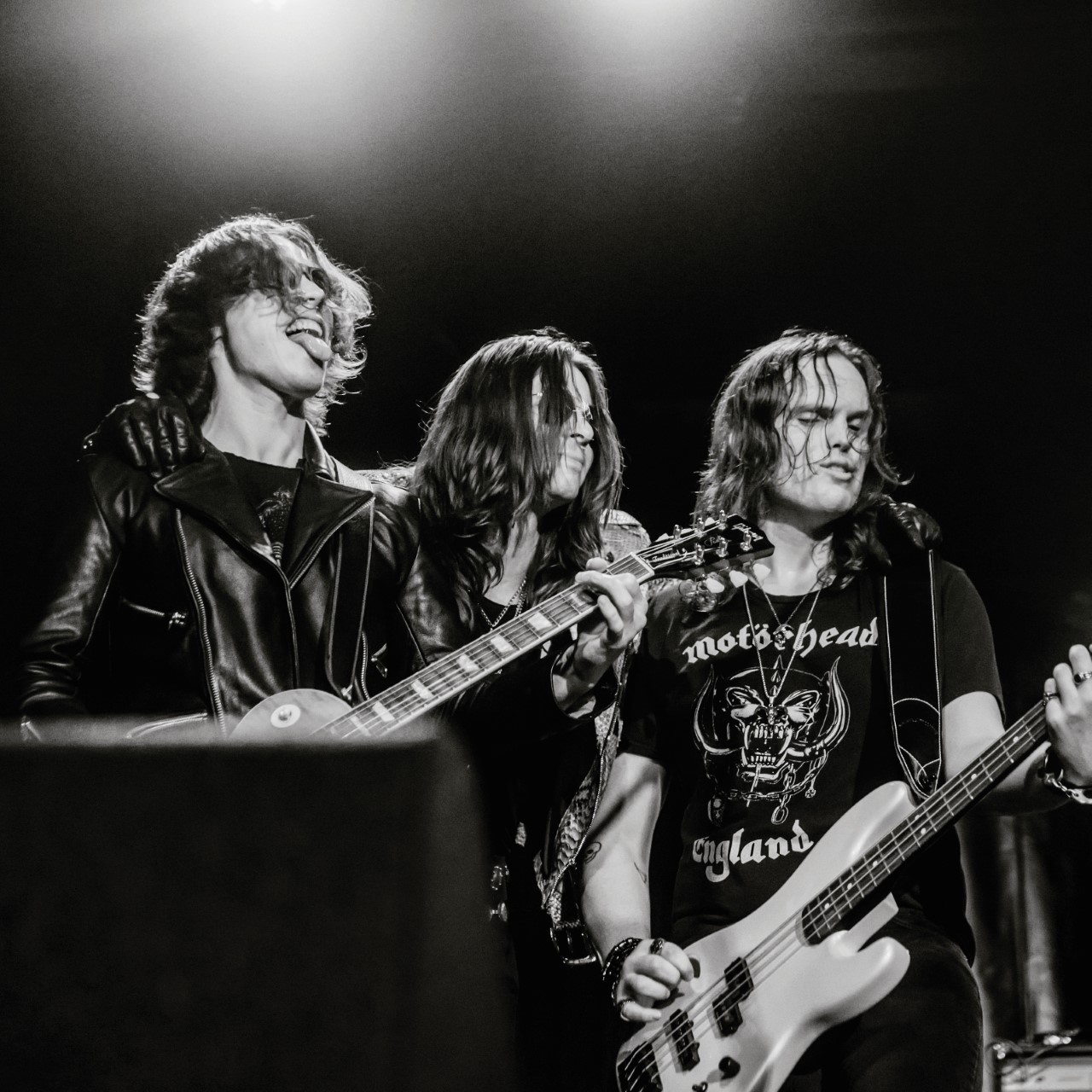 BraveWords: How has the single format helped the band? Are there any aspirations to release a full album?

Drake: “It’s allowed us to concentrate on each song individually and get the best out of each track we record, rather than trying to jam everything into one recording window.”

Terranova: “Once we have eight songs recorded, the plan is to release them together as an album of eight strong songs, so we get the best of both worlds here.”

Tryon: “We generally have about three to five songs cooking and run with the hot hand of whatever is coming together the best, so we’re always leading with the strongest single or what we’re the most excited about.”

BraveWords: What’s in store for the future of Crash Midnight?

Terranova:  “We’ve got a big show coming up December 2nd here in Las Vegas with LA Guns at Vamp’d.”

Soho: “We got to play with them a couple years back and it was a killer show.  Our fan bases really mesh.”

Tryon: “We have a lot going on with the new Sand Dollar Downtown at the Plaza Hotel & Casino too.  We did a string of shows there earlier this year, including playing their Grand Opening weekend and we’re working on some even bigger stuff for early next year.”

Soho: Yeah we’re in a really good place right now as a band.  The line-up is the strongest it’s ever been, we are in complete control of our entire catalog and our direction so we can pick the best opportunities and ways forward for ourselves.

Donaldson: “Fortunately, we’ve taken the steps to be where we no longer have to answer to anybody.  We’re content to keep putting out our own style and sound and just let the rest of the world catch up.”

Drake: “We have a lot of new material we’re recording and shooting to have a new song out about every three to four months going forward.  We’ve worked really hard as a band to be able to put all this stuff out on our own terms.  We’re not chasing any trends or anything.  The stuff we write is true to our experience and the sound we believe in.”

Keep up with the band at crashmidnight.com.

HAIM reveal they're going to be guests on 'Sesame Street'