Lorde Joined by Arlo Parks and Clairo at Glastonbury: Watch 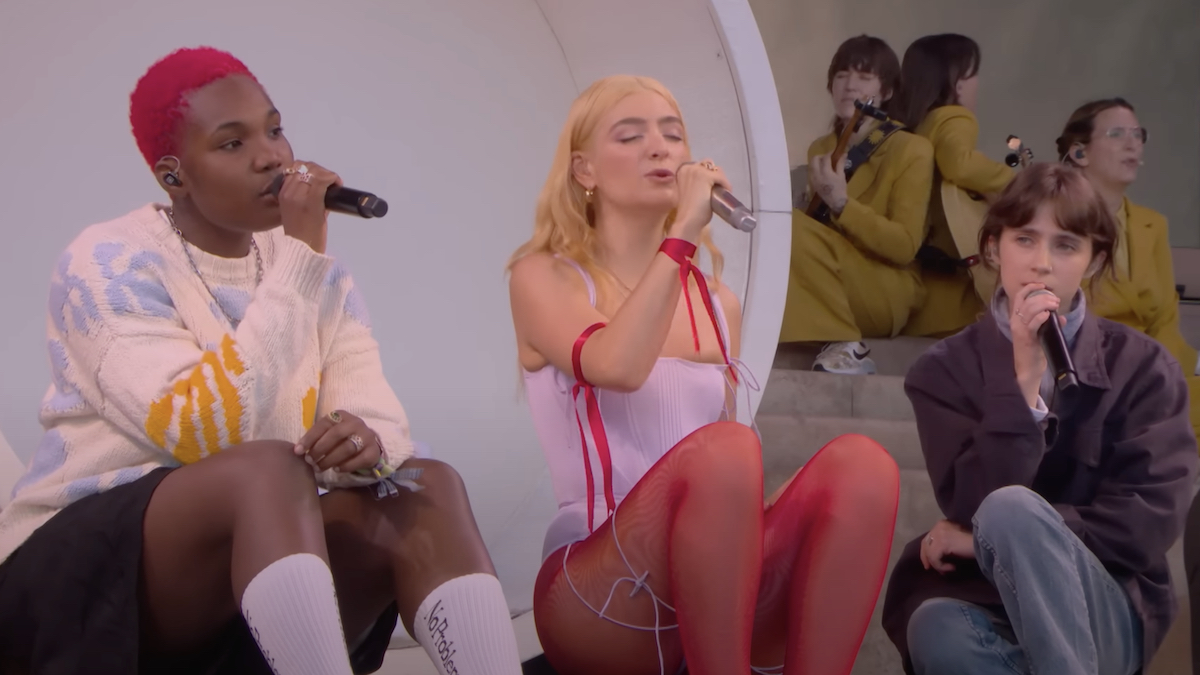 Lorde brought out Arlo Parks and Clairo for a special performance of the Solar Power track “Stoned at the Nail Salon” during her set at Glastonbury Festival 2022 on Sunday. She later proclaimed, “Fuck the Supreme Court” in a revised spoken word segment of “Secrets from a Girl (Who’s Seen It All).”

Introducing the pair as her “two very special friends,” the New Zealand singer laughed and embraced the two recent tourmates throughout the song, which she also prefaced by declaring it “the ultimate comedown anthem.” Watch the full performance below.

The collaboration occurred only a few songs into Lorde’s set, and was notably followed later in the show by remarks made in an extended outro for “Secrets from a Girl (Who’s Seen It All)” regarding the US Supreme Court’s decision to overturn Roe v. Wade on Friday.

In a play on the album’s spoken word portion featuring Robyn, Lorde said: “Wanna hear a secret, girls? Your bodies were destined to be controlled and objectified since before you were born. That horror is your birthright. But here’s another secret: You possess ancient strength, ancient wisdom. Wisdom that has propelled every woman that came before you. That wisdom is also your birthright. I ask you today, make accessing that wisdom your life’s work. Because everything depends on it. Fuck the Supreme Court.”

“Fuck the Supreme Court” was a common refrain over Glastonbury weekend, from Phoebe Bridgers’ primal yell on Friday to Olivia Rodrigo inviting Lily Allen out to dedicate their rendition of “Fuck You” to the name-dropped Justices who voted in support of repealing women’s reproductive rights. The festival was later concluded by a blood-soaked Kendrick Lamar, who offered the variation: “They judge you, they judge Christ! Godspeed for women’s rights!”

Lorde’s “Solar Power Tour” returns to North America for a stretch of shows rescheduled from April, which the singer postponed due to laryngitis. She returned to the stage later that month in a performance recapped by Consequence, while more recent shows have offered breakouts like a cover of Carly Rae Jepsen’s “Run Away with Me.” She’ll tour the US and Mexico into October before launching into a full Australia/New Zealand leg in early 2023. Grab your seats via Ticketmaster.

Meanwhile, Arlo Parks will be on tour in Europe and Australia this summer with a North America leg kicking off in September along with support dates for Florence + The Machine. Tickets are on sale now here. In April, she made another special guest appearance during Phoebe Bridgers’ Coachella set to perform “Graceland Too” and “I Know the End.”

Clairo continues her North American tour in support of her latest album Sling in July, followed by a full European excursion running through October. Check out Consequence’s recap of Clairo’s tour stop at Radio City Music Hall in New York from earlier this year, and claim your spot at one of the remaining dates via Ticketmaster.

New ending to secrets from a girl for Lorde #Glastonbury2022 @DidLorde pic.twitter.com/V4QSotqWWQ

See For Me Movie Review

The Clean’s Hamish Kilgour Dies at 65

See For Me Movie Review

‘Fleishman Is in Trouble’ Recap: Premiere, Episode 1 on Hulu