There’s a moment early on in summerbruise’s The View Never Changes where Mike Newman passionately delivers the lines “cause it took just about everything in me just to send that text / just to bail on these people who just wanna see me happy / but I’m just not that up to just stand around and drink / I’m done with getting fucked up / ‘cause i never wanna die / I’m speaking figuratively of course / cause I still get fucked up sometimes, but / i’m just not in the mood” over guitars stacked with distortion that serves as a pretty good picture of the band’s attitude and sound over the record. It’s the heaviest moment on the record at that point—as “Brain Chowder” follows the light and winding “Kayfabing the Boys,” which builds its sound more off the combination of the keys and percussion than it does the guitars—while also perfectly representing Newman’s lyrics that float between self-reflection and self-deprecation over the course of the record, never getting too sentimental without giving a wink or smile.

“With Friends Like These, Who Needs Empathy?” is wildly catchy with the repetition of “I don’t think you know what the word means” overtop a cutting lead guitar line and joyful hits from the horns. It’s followed by “Happy Hour 2’ and “Roses (Stanley’s Song),” two far-reaching tunes that find summerbruise playing with dynamics and tempo to create some triumphant, emotional moments in the middle of the record. Those emotional highs are felt especially in the final moments of “it’s time to let go of / what you’ve let go by right in front of you / and try to look ahead and give a shit / about the stuff that actually lasts that you still have while you still have it / before it’s gone, just more you’ll never know you missed” a the end of “Happy Hour 2” and the repetition of “you gotta know you’re someone else’s roses too / you can’t forget you’re someone else’s roses too” that leads to an eventual fadeout of huge guitars and synths in “Roses (Stanley’s Song),” a song that includes a little lyrical nod to Elliott Smith near the start. With its showtune piano beginning, “Thanks!” pushes the group a little out of their comfort zone, leading to the eventual realization of “shit gets so hard when all i really wanna do / is just be right here not doin’ shit with you,” which comes off as a brilliant nugget of wisdom when wrapped up in the band’s anthemic attack at the end of the tune. Closer “Quitting in the Name” is perhaps both the most ambitious and clever track on the record, with the opening lines “bury me with all this stupid merch / I’ll sleep better knowin’ I fed a few more worms / after pissin’ my whole life away waitin’ for Kate to get off work / it’s just song after song after song about doin’ fuckin’ nothing / when I could’ve been doin something that was actually worth somethin’ to anyone / well, anyone but me” delivered over a workhorse rhythm section that is built up for a wild end to the record.

The group makes an obvious nod to The Weakerthans in “(Plea to a Cat Named) Spaghetti,” and the Canadian group works as a good reference point if you’re unfamiliar with summerbruise—the lyrics are wordy and clever, but never too drawn out, while the the vocals rely on a more even delivery most of the time, allowing the meticulously produced instrumentals to add emotion through waves of distortion, drum kicks, handclaps, and flourishes from keys, tambourines, and different mallet percussion. Also like The Weakerthans’ records, summerbruise’s The View Never Changes sounds great on first listen, but reveals so much more each spin as you begin to realize how much the band has going on here and how well it all comes together in a tight 25 minutes.

The View Never Changes is available on tape and vinyl through Old Press Records. 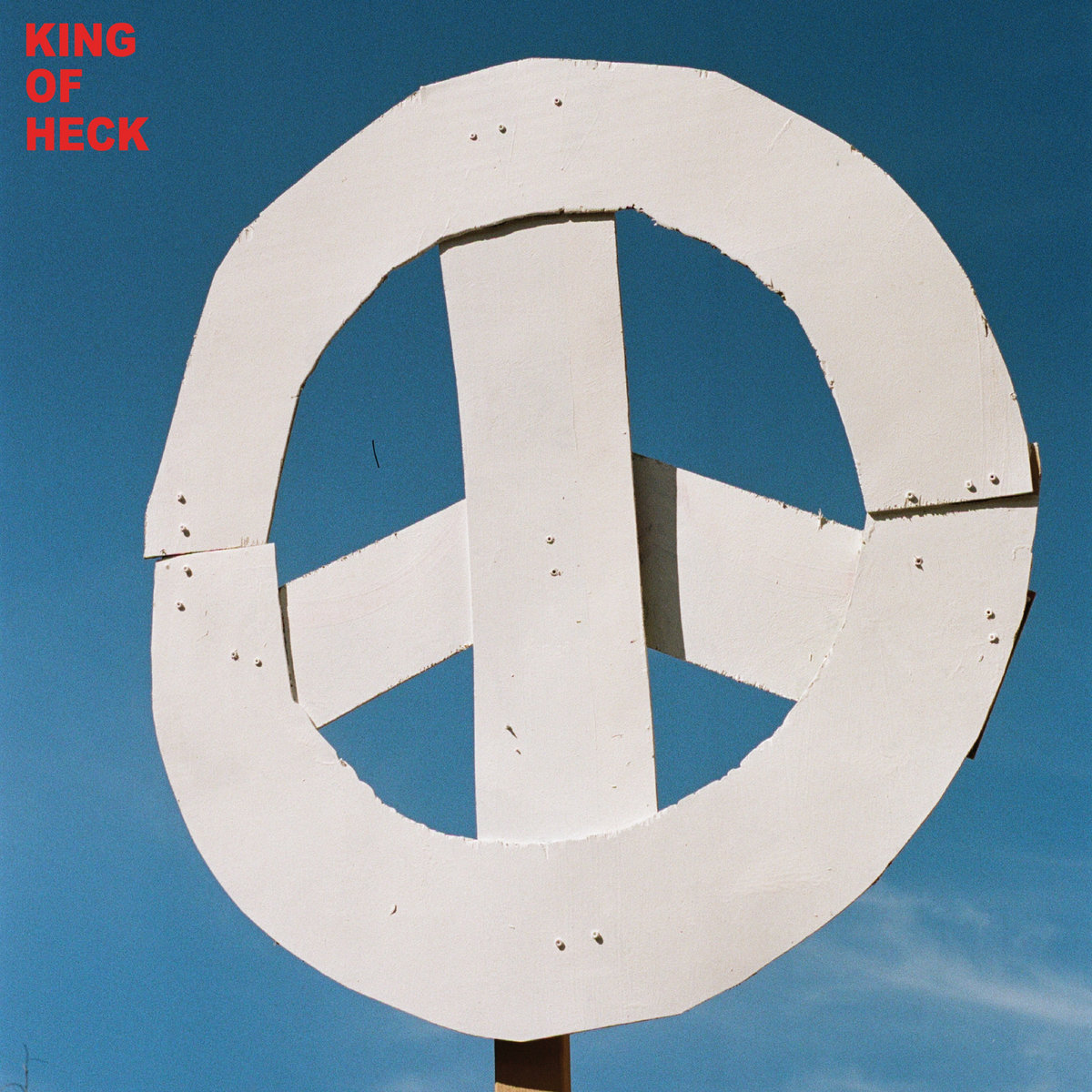 There’s a feeling of haziness that permeates and hangs over the music on King of Heck’s debut Kingo. That haziness comes from the fuzzed-out garage rock guitars, the clouds of weed smoked conjured up by both the lyrics and general vibe, as well as the desert scenes that seem to be reflected in the bright sunniness of the music. The vocals are delivered in a loose, slack way while still sounding strong intertwining with the lead guitar lines in a way that fits the wandering, free feel of the music. This is not to say the record sounds like a standard, midtempo stoner rock album, as the group throws a bunch of different tempos and sounds that fit within the fuzzy, laid-back style of the record as a whole. Opener “Spring of My Life,” for example, flips from a slow tempo, freewheeling tune to an aggressive garage rocker, while “The Waves” throws a southern-friend guitar solo on top of a fun, bouncy rhythm guitar line.

With its loping lead guitar pattern, the verse of “Human Shotgun” feels like the quintessential example of King of Heck’s slower, hazy sounds, while the chorus is the perfect encapsulation of the group’s heavier side as a tambourine backs a ripping guitar part and the vocals that are more shouted than sang. The run of tunes it kicks off in the middle of Kingo is absolutely fantastic, as it’s followed by the airy “Bigspin,” notable for its eerie, atmospheric synth parts. The melodies from the keys and bass on “Coast”—as well as the background vocals warped through effects—wouldn’t feel out of place on the Gorillaz self-titled album, making it a fun diversion before the killer “Kid is Inna Missile.” A riffy slice of garage rock with an irresistible chorus backed by tambourine and the sickest guitar solo on the record, it’s kind of hard to believe “Kid is Inna Missile” isn’t a hit.

King of Heck keep things varied to close out the album on a run of songs starting with the folky “See You Through,” which feels like a sort of reprieve following “Kid is Inna Missile.” “Alex” is a catchy, rollicking rock tune, while “Talk” grows out of a somewhat disorienting, unnerving guitar line, feeling like a transitory, ethereal bridge to album closer “Hell USA.” Reaching comfortably past five minutes (without losing your attention) before an ambient ending, it’s a killer capper to the record and one that’s easy to imagine as an explosive closer to a live set.

Kingo is available on vinyl through Counter Intuitive Records. 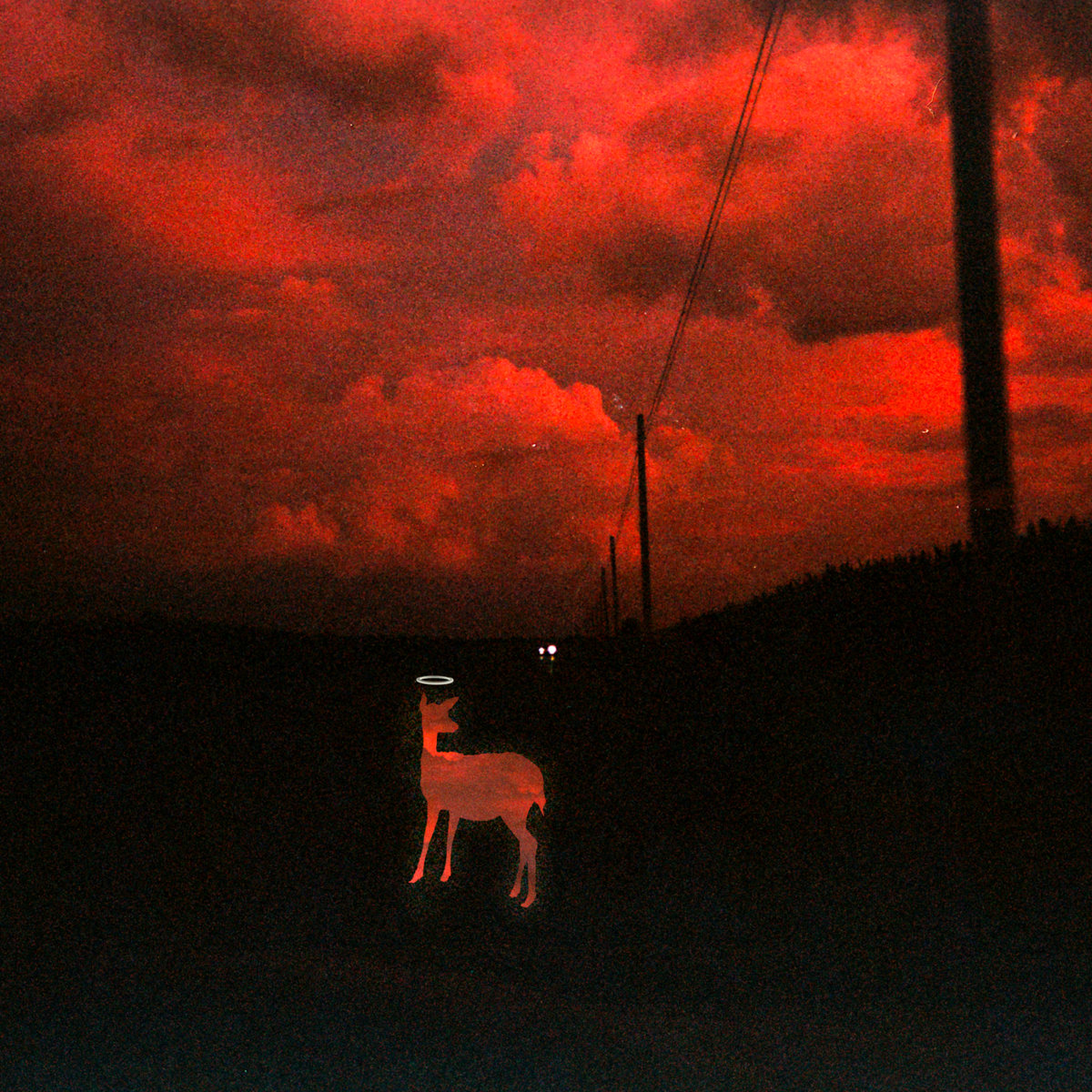 Tyler Heaven’s Darkness on the Edge of the Parking Lot is definitely one of those records where the title and cover perfectly capture the feel of the music. Built off reverb-soaked guitars and swirling violin parts, the album has a haunting and atmospheric feeling that matches the late night drives described in the lyrics. The deer on the cover, standing ominously with its otherworldly red color matching the cloudy sky, comes up in the lyrics in “Truce” and “Lincoln,” with Brady Lanzendorfer intoning “just go slow / this time of year the deer are begging to get hit” over a fingerpicked pattern on the “Lincoln,” a tune that works as a midpoint or mile marker on the record as the gentle acoustic pattern gives way to an effect created by the violin sounding like a truck in oncoming traffic waking you up from falling asleep at the wheel.

“Lincoln” is bookended by “Worry Melt”—a nice country waltz, highlighting Dan Grushecky on the violin, paired with some barroom piano—and “Jetta,” which has somewhat of a 70s rock feel with the arpeggiated guitar lines and raucous violin melody. The second half of Darkness on the Edge of the Parking Lot cranks the intensity up a bit without losing the record’s reflective late night feel, as “Bat Halo” is a huge rocker that gets mileage from a haunting violin line paired with the repetition of “nothing’s going to change your mind.” “Plums” alternates between a somber organ-driven verse and a soaring, explosive chorus. Lanzenorfer’s delivery of “Breaking the rocks up and coughing your lungs shut / the dust is dancing in the light. What are we drinking tonight?” is followed by the album’s most torrential instrumental run, making the track one of the standouts here. Closer “Tyler Heaven” is the lightest track musically, making it feel like the start of the morning after being up all night walking around the city, or driving deer-filled backroads; things feel slightly more uplifting and bouncy here as the blood red clouds of the cover begin to blend with the yellow of the rising sun.

some surprises, some not – IndiePulse Music Magazine

How a surprise viral hit helped Beach Weather come back together

‘Dead Is a Loaded Word’ on This Show

The Worst Marvel Moments of 2022